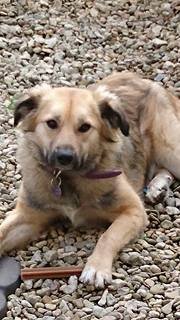 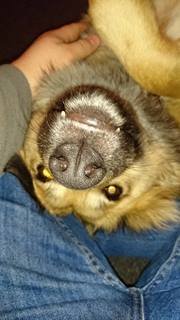 Spirit (was Jenni) was a nervous and frightened dog who had been travelling for a long time with Holly and other dogs that were just as frightened as her. They didn't show it as much as she did though.

Spirit had only ever been with other dogs and people that would come and go without wanting to get to know her. Rosoiu Event Magdalena was the only person who had cared for her and was sad she wouldn't see her anymore.

Since coming to the UK Spirit has made new friends, She has a sister called Foxie ( yes she's a cat), and a boyfriend called Sam. Spirit loves going to the woods with Sam. Her new mum lets her off the lead to roam about with him and they have such fun. Spirit always keeps an eye on her mum though as she doesn't want to lose her. She has even been to the beach on holiday, she liked paddling, but wasn't sure about the waves! Spirit also gets to meet and play with other dogs and children and has helped a lady that had a fear of dogs. She sat by the side of the lady very quietly and let herself be stroked even though the woman was shaking, Spirit just stayed still for her. The woman was so pleased that she managed to do it and said that Spirit was wonderful and friendly.

Spirit now believes in herself. She has become a friendly, loveable and playful dog. Her adopter is so patient and good with her, She understands Spirit and what she needed. All of this has been brought about by her adopter loving and wanting her and giving her the time to grow in to herself. They would like to thank SOS Romanian Rescue SW for saving her and placing her with them. They love her as much as she loves them and know her life is going to be a happy one filled with love.