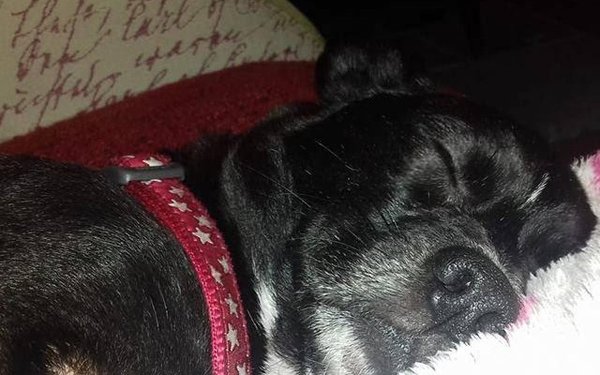 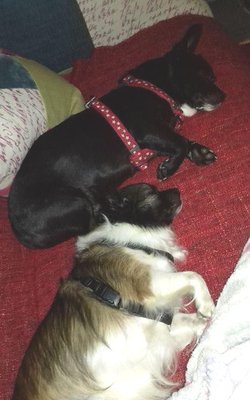 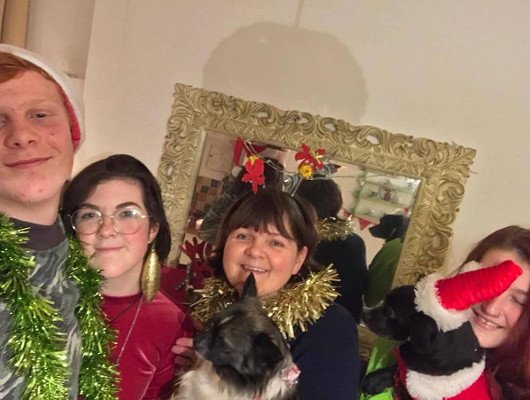 From the moment we first set our eyes upon Scrumpy on the Romanian Rescue page we knew he was the dog for us; his sob story of violence perpetrated on him by a gang of large dogs which resulted in a severe back injury just served to ‘seal the deal’; Scrumpy would suit us to the ground.

We also have Fang at home (a pedigree long-haired Chihuahua – also rescued) and I have never been too keen for him to be on his own whilst I am at work; maybe a companion would be desirable, brothers-in-fur so to speak.

We introduced the pair of them at the local park; nerves were jangling, tension was in the air and to begin with they were very wary, circling one another with a slightly snarly lip.  It took about two weeks for them to settle down, get our routines sorted and to assure Fang that he was still Top Dog but settle down they did.

Scrumpy has an unusual gait which endears him to us even more and I was initially concerned he would hold Fang back on his 4-times-a-day walk; fears were soon put to one side as he zoomed around, weaving between our legs and chasing young Fang with the zeal of a stallion!

Scrumpy has grown much attached to all of us, especially me and has quickly become my shadow.  He sleeps with Fang and my daughter Jess, waking me at 6 am to let me know it’s time for a wee-wee and a snack!  When my eldest daughter Kate is home from Uni, she becomes the favoured one.

With his gappy grin, smooth black fur, wobbly walk and beautiful dark pools for eyes Scrumpy has found a home for life with us.  We do not recognise him as the same dog which we took home on that first day, but now it feels as if he has been with us forever!